Let’s Get This Burger: 300 Days Without Food 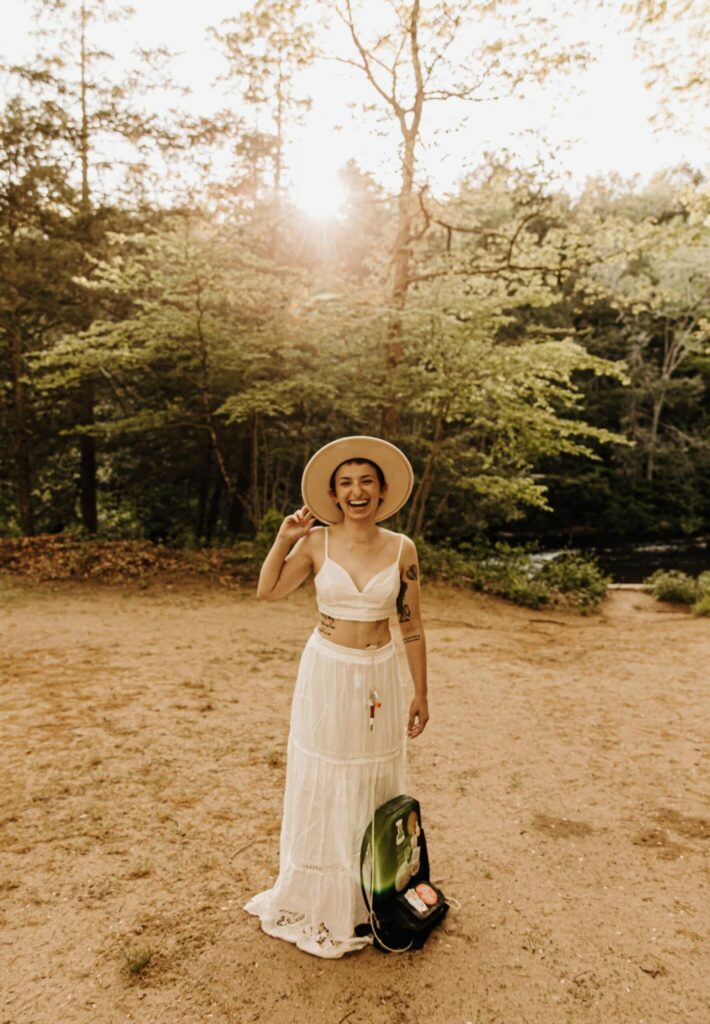 Last week I hit day 300 without anything to eat or drink.

At age 22, I was living in Hawaii with my military boyfriend and getting ready to move to Virginia, when I was told I had cancer. I had a grapefruit sized tumor sitting in my chest that was blocking 50% of my airway. At this point I was having trouble breathing and could only really eat much since it was so hard to swallow. Even with all my symptoms, it took me 6 months to finally get a diagnosis. Despite all of this, I was told I had “the good cancer” and that I would complete 6 rounds of chemotherapy, lose my hair and move on with my life. “Easy” day, right?

Driving to the hospital on August 5th, 2020 for my first round of chemo, I felt great and ready to kick this thing’s ass. The plan was 5 days inpatient chemo, then 2 weeks out of the hospital. Repeat 5 more times. I had my little cancer binder decorated with stickers and little love notes, and a hospital bag packed with a week’s worth of clothes. We stopped at McDonald’s to get an early lunch, because all I wanted was a cheeseburger before the 5 days worth of hospital food ahead of me. Sadly, I couldn’t keep my cheeseburger down.

The first 24 hours everything seemed to be going according to plan. I got my first PICC line placed and we started the 24/7 chemo. My boyfriend was able to stay with me for most of the day and we were playing board games and laughing the whole time. I ate what I could, which wasn’t much.

Day 2 didn’t go as well. I found myself constantly in a panic ringing for a nurse, not being able to breathe. I’d try to eat something and then be sent into a coughing fit. It felt almost like everything I ate was going straight into my lungs and drinking water only made it worse. I sat there all day, coughing up food and gasping for air and terrified that I would ring for a nurse and they wouldn’t make it to me in time.

My doctor finally ordered an endoscopy and bronchoscopy to take a look. She suspected that my tumor was pushing on my esophagus as well, making it difficult for me to eat. She explained that during the endoscopy I would be awake but super drugged, and then I would be asleep for the bronchoscopy. They wheeled me into the procedure room and drugged me up for part one. My memories from this moment are sparse, but intense.

I fuzzily could make out the tiny screen next to me, which showed the doctors the images of my esophagus as the tiny camera went down. Next to the screen were about 5 other people; I assume they were doctors, maybe specialists, maybe students, I’m not really sure. As the camera went down my throat, I heard an audible gasp and an “oh my god” and watched these 5 faces next to me stare in astonishment at the screen.

And then I fell asleep.

At this point, my boyfriend had to leave to go to his next duty station in Virginia, where I was planning on joining him, but our time was running out. I was quickly put on TPN and received nutrition through my IV, but this wasn’t sustainable. They told me that in order for me to be able to travel back to the mainland I would have to be given a permanent feeding tube, but because of my blood levels from chemo no one at the hospital would agree to give me one. I was stranded until my blood counts went back up enough to get a tube.

The day I finally got my J-tube was the same day my boyfriend had to leave for Virginia, about two weeks into my hospital stay. I woke up from the procedure clenching my side in pain, unable to walk without hunching over. The nurses arranged that I could say goodbye to my boyfriend through the glass window of the 1st floor, so I dragged myself out of bed not even an hour after my tube placement, heavily medicated, to go say goodbye. And just like that, I was alone in a state 5,000 miles from all my loved ones.

The days that followed were filled with the most anxiety I had ever felt in my life, learning to adjust to this new addition to my body and terrified of what may lie ahead. I spent weeks of sleepless nights, fighting the nurses on upping my feed intakes because I couldn’t handle it mentally. I refused to look at the tube poking out of my abdomen and begged someone else to deal with the cleaning. At 22 years old, my body was so sick and so weak. My hair was falling out, I needed help walking and pooping and everything in between. I was alone and terrified.

Just over 300 days, 6 rounds of chemo, 25 rounds of radiation, and hearing the word “remission” later, and I am 22 days away from having my entire esophagus removed and my guts rearranged to give me the ability to eat again. People always ask me what my first meal will be post-surgery. While I will definitely be on a liquid diet for a while, I do have what I am calling my “victory meal.” Without a doubt, it will be a cheeseburger.