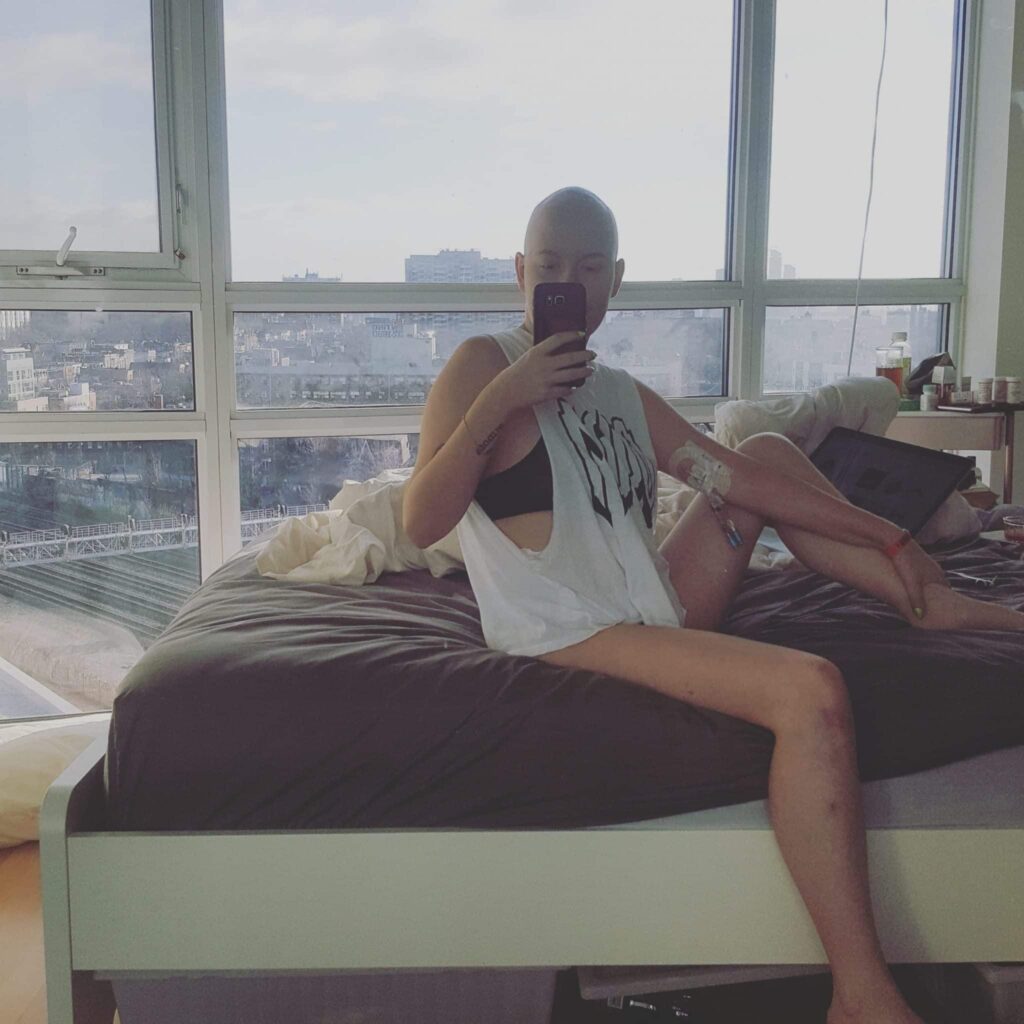 In March 2018, I started my dream job making costumes for a large television series. The workdays were often 14 hours or more and it wasn’t uncommon for us to go up to 2 weeks without a day off. It was tiring but I was very passionate about the work. A few months in I started to become extremely fatigued, but I chalked it up to working long hours. As time progressed, I started to develop migraines that would last for weeks, and one time I went for a massage that left me covered in bruises. By November 2018, I was unable to walk long distances without becoming winded; I had a nagging cough and was absolutely exhausted.

On my day off, I slept for 20 hours straight and somehow felt worse, so I figured I should head to the emergency room to get assessed by a doctor. When I was triaged, they said I had a fever and likely just had the flu, but they did some basic blood work for good measure. After 5 hours of waiting, I was called into a room where I was told I had leukemia. My hemoglobin was so low that the doctor didn’t understand how I was even conscious. I received 4 bags of blood and was immediately transferred to the cancer hospital in my city to begin my 30 day induction chemo.

At the age of 25, I was diagnosed with B cell acute lymphoblastic leukemia. Aside from developing high blood sugar from the steroids and having to be put on insulin, my induction chemo went pretty smoothly and put me into remission. However, ALL has a 2.5 year treatment protocol, so it was only the beginning.

2 weeks after I was discharged, I spent 3 days in the hospital with clinical meningitis from a reaction to my lumbar chemo. Less than 2 weeks after that resolved, I suffered a perforated bowel and required emergency surgery to remove 1/3 of my large intestine and was given an ileostomy as a result.

After healing from surgery and restarting chemo, I developed a severe allergy to my chemo drug and needed to be given an alternate drug that happened to be in a global shortage. After nearly 4 months, my oncologist managed to secure enough of the drug to finish that phase of treatment. Two days after finishing that phase of treatment, I suffered a blood clot in my arm that resulted in the removal of my PICC line—thankfully, it was caught early enough that it didn’t bother me too much.

I am now about 5 months away from completing treatment and currently dealing with a case of pneumonia despite self-isolating due to the threat of Covid. It makes me feel vain and awful to say that despite all these medical complications, the hardest part for me has been the physical changes to my body. As a woman in my 20s it was very hard for me to watch my body go through all these changes and have no control over it. Losing my hair and gaining 60 pounds from the steroids has left me with a lot of body dysmorphia.

The biggest lesson I have learned from having cancer is to listen to your body and be proactive when you think something is wrong. I think I was making excuses for how I was feeling because I was scared of what was happening. But if I had gone to the doctor sooner and advocated for myself, my leukemia could have been caught a lot sooner.