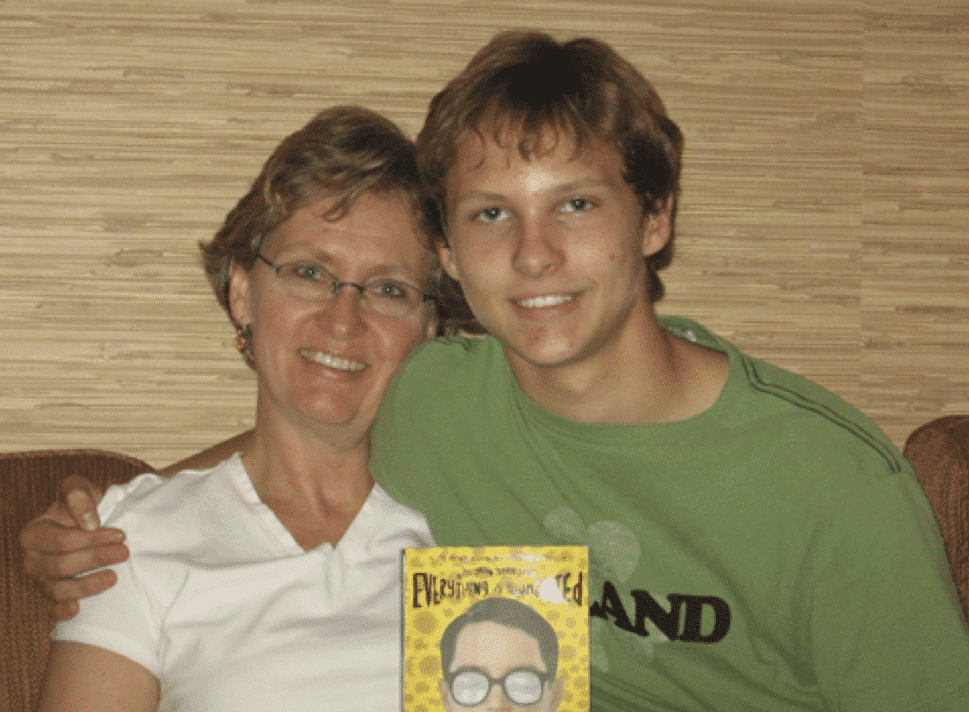 SC: Full Name and Where you’re from:

JO: I’m a mom, caregiver and social worker committed to increasing supports for the AYA community.

SC: Canceranniversay? And what date do you consider it to be? Last day of Chemo?

JO: Hmm. Brendan passed away February 2010, was diagnosed with brain cancer Christmas Eve 2008. I suppose we look forward to remembering him on his birthday most of all. He would have been 30 in September 2020.

SC: How has Stupid Cancer helped you?

JO: Brendan’s friends were remarkable during the 14 months from diagnosis until his death — and honestly even afterward. What we came to learn, however, was that most friends of young people with cancer scatter. This kind of blew us away — Brendan cherished the time he spent with his friends and if you take a minute to think about how important friends are to all of us, it is especially so for teenagers and young adults. Oddly, there were few — if any — resources available for friends. We started to think about how to change this, and the idea of the @$!& My Friend Has Cancer video series was born. Since I knew one story — Brendan’s — I knew we needed more input. So we started holding focus groups — including at Stupid Cancer’s Annual meeting — and around the country with young adult cancer survivors and friends of the AYA to get their stories. We convened an Advisory Council to help guide the project, which also included Alli Ward from Stupid Cancer. While the video series is a tribute to Brendan’s friends, it would not have come about without the AYA community — the fabulous cast and crew and especially filmmaker and survivor Hernan Barangan and public health researcher and survivor Andrea Betts. We’re honored that the experience of Brendan and his friends landed in such loving and capable hands.

SC: Tell us your story:

JO: 2008 — Brendan was home on winter break during his sophomore year at University of Michigan. He was complaining of headaches — and at times they got really bad. We thought stress, migraines –maybe he needed glasses. But an MRI on Christmas Eve told us otherwise. Brendan had a brain tumor. From the beginning, Brendan wanted to spend as much time as possible with those he loved, most especially his friends. Brendan’s friends stepped up BIG TIME. The listened, laughed, distracted and just stayed with him. It wasn’t always easy for them — they too knew this was serious business. But somehow we were all in it together. Brendan’s been gone 10 years, and we are still close to many of his friends, and their families. In fact, at their suggestion, we gathered in September to mark what would have been Brendan’s 30th birthday.

SC: What is the biggest lesson you have learned through this experience?

JO: In the beginning, while we knew Brendan wanted to spend as much time as possible with his friends, my instinct was to be “momma bear”. This was serious business. Sure I thought Brendan had great friends, but to be honest somewhere in the back of my mind I was thinking, “isn’t this the same group of knuckleheads that went to beach week together.” ?? What did they know about taking care of someone who had been through what Brendan had? Fortunately, my husband’s level head and wisdom prevailed — and we’ll all be forever grateful. As a young man, launching his own life, we had to take the lead from Brendan and trust his most treasured support network.

JO: I think as a parent of an AYA survivor one challenge is that the illness comes just at the time of life when we are “letting go” and encouraging a young adult’s sense of independence. This is not an easy transition in the best of times, and to say that a cancer diagnosis complicates this is a real understatement. We were fortunate that we had known many of Brendan’s friends — and their families — for 20 years. In the video we talk about “Comfort In — Dump Out”, a simple depiction of how to give — and get — support. Think of a series of concentric circles — a target with a bullseye in the middle. The cancer survivor is in the center and the first ring beyond that is for immediate family, partners, closest friends. The next rung might be neighbors or close co-workers, and after that are other acquaintances or colleagues. You get the idea. Once you identify where on the bullseye you are in relation to the cancer survivor, your job is to provide comfort into the people on the rung closer and then you seek support — or dump out — to those a rung further out. We knew Brendan’s friends were getting support from their own families — and from each other. And to be honest — it wasn’t always easy for them, or without anxiety for me. But, eventually I came to trust that when friends would come over — or Brendan was going out with them — he was in very good hands. We were a team of co-caregivers, jointly supporting Brendan.

SC: What do you do that brings you the most comfort and joy?

JO: While we knew friends and family would remember Brendan and hold him in their hearts forever — what we could not have anticipated has been the unexpected opportunities to include Brendan in the efforts of other young adult survivors working to change the way we support this population.

SC: What motivates you to keep going, smiling, fighting?

JO: The fact that Brendan’s life and story has touched so many lives. And, that from the beginning, Brendan was worried about my husband and I. He wanted assurance that we would once again find joy in our lives should he lose the battle with cancer. I think this request has been in some ways the hardest but also the greatest gift Brendan left us with. He challenged us. To honor him is to honor this request.

SC: Any music, movies, books, art that have inspired you during your journey?

JO: Ahh — I love this question. Brendan was an “old soul” and a gifted writer (says his mom!). Right before he died we learned a book of his poetry would be published, “Summer Becomes Absurd”, (available on Amazon and at Finishing Live Press ?). Knowing what it meant to Brendan to have his poetry published, we decided to try to offer the same opportunity to other young adults with cancer. “This Thing Called Poetry” (also published by Finishing Live Press) was released in 2019 and includes the voices of 20 AYA survivors. Art is healing and words are legacy!

SC: Do you have a favorite quote, mantra or saying that has helped you during your journey?

JO: How about a poem by Brendan Ogg:

A Leaf of Knowledge

I don’t know
what the doctor means by “mostly”
Within the radiation field
I don’t know
for how long I will need this can
I don’t know
what the scan will look like one month,
four months,
four years from now.
All I know is the air that I breathe in this instant-
spring’s sweet whisper-
into my lungs,
my friend at my side,
his broad hand between my shoulder-blades,
the living God,
the love of my friends and family,
and the warm skin of her knee,
onto which I lay my cheek, to sleep.