My Journey through Cancer (Mustaches 4 Matt) 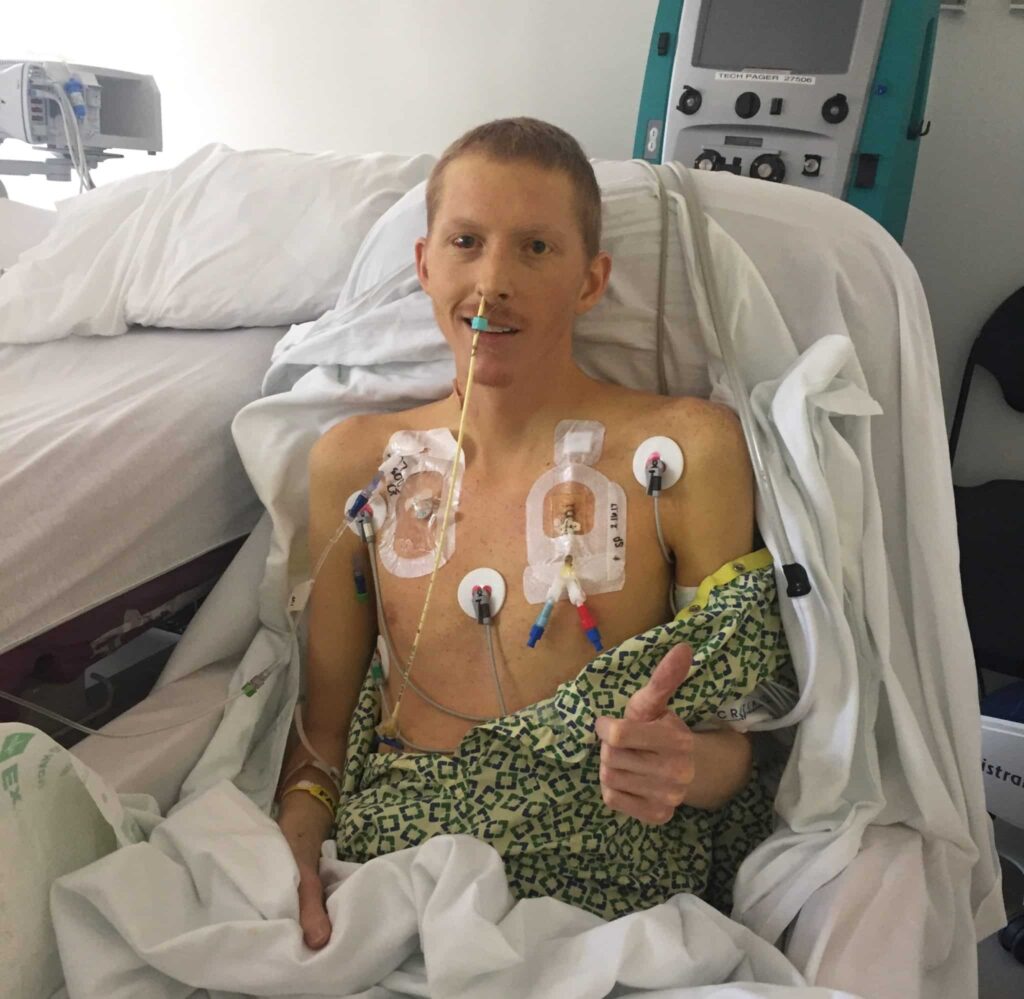 On August 12, 2016, my life changed forever. I was over my girlfriend Lauren’s house and had been puking blood. I could barely stand and I felt like I had the worst case of the flu. It was at the hospital that we learned my total blood count was down to a third of an average male. My blood transfusion required six bags and an endoscopy was performed. The next morning my doctor sat down with me and explained “Matt we found an 11-centimeter tumor in your small intestine and we believe it is cancerous. We need to get you to the hospital immediately.”

After multiple tests, I was informed that I had Stage 3C Testicular Cancer that had originated in other areas of my body and metastasized. I would require 5 rounds of chemotherapy to shrink the tumor before surgically removing it.

The most challenging part was looking at the pain in my parents’ eyes and telling Lauren when we had only been dating for 3 months at the time. I had no idea how she would handle the situation but once we connected we hugged and cried for a while, and right then I knew she was my rock in this journey.

Each round of chemo became more difficult not only physically, as one would imagine, but mentally as well. I began to lose the red hair that had always defined me. Then, one of the toughest mental roadblocks hit as we laid to rest my three-year-old Boxer, Duke, who had been battling cancer alongside me. After a period of grieving, I told myself I can either give in or fight like hell. I dedicated my final rounds of chemo to Duke.

When I finally reached my last day of chemo, it was one of the most gratifying days of my life because I knew I would start feeling like myself again- or so I thought…

Upon review of my scans, my oncologist told us, “The good news is that the tumor has shrunk to 3-centimeters. The bad news is the tumor is wrapped around your inferior vena cava” — a large vein carrying blood from the lower body to the heart. It was apparent this surgery would be complicated.

The day of surgery, my stomach was in knots. I said goodbye to my family and Lauren. When I woke, I learned the 10-hour surgery had successfully removed the cancer. The vena cava, however, couldn’t be salvaged. This led to massive swelling in my body and I retained 50lbs of fluid. My surgeon informed me this will gradually drain.

Two weeks from my hospital release date, the draining suddenly stopped. I was in excruciating pain and found myself in the E.R. where the situation quickly escalated.

In emergency surgery, a “tap” procedure was performed, draining over seven liters of fluid. This did little to reverse the trauma my body had experienced, and I now faced Compartment Syndrome caused by the pressure buildup. My liver and kidneys were failing, and I fell into a 2 week non induced coma.

While unconscious, I was hooked up to countless machines, a breathing tube down my throat, a cone drilled into my skull to monitor brain swelling and multiple catheters in my body. Two additional surgeries were performed to drain fluid and I had begun dialysis. The prognosis was grim, but my parents and Lauren never left my side.

Three church services were held on my behalf where hundreds gathered in prayer for my healing. As the final service concluded, a close friend in attendance received a call from my mother exclaiming that I had just woken up, and in Lauren’s hands nonetheless. Everyone was shocked but I have no doubt that those prayers were heard from above.

At this point, my body was depleted, my muscles had atrophied, and my weight loss was devastating. It took too much energy to even talk. I wasn’t out of the woods yet.

I was making small strides until one of my nurses removed a central line from my neck that sent my heart out of rhythm. Eight minutes of CPR and multiple electric shocks later, I was back. I believe this was the closest I came to death, but God had much more in store for me in this lifetime. As a precaution, I was sedated for a week until my body was sufficiently recovered from the cardiac arrest.

On Valentine’s Day, I emerged from the coma. My recovery was slow, first learning how to sit up in my bed. I then practiced standing in 10-15 second increments before I was strong enough to take my first steps.

Despite my weakened state, I continuously increased my steps. My progress was almost too good to be true, and I could finally see the light at the end of the tunnel. In fact, it was too good to be true. I glanced down at my stomach to discover my spleen broke through the stitches. They wheeled me off to my fifth major surgery in a matter of a month.

I woke up back in the ICU but this time, it was different. Due to the excess of surgeries on my abdomen, they were unable to pull the incision taut. They placed a Wound VAC over the area that was left open and told me my tissue would repair itself in time.

I worked my way to the step-down unit and ultimately to rehab for two weeks. After 53 days in the hospital, I was finally released on March 17, 2017…exactly one year from when Lauren and I met. Coincidence? I think not!

At my lowest point, I weighed in at 110lbs. For a 5’10″ male who eight months prior was a solid 185lbs. from lifting every day, I was unrecognizable. Nurses paid regular house visits to care for my exposed wound, and a physical therapist came over bi-weekly for rehab. That first month home was just as draining as being in the hospital. I still required round-the-clock care, was completely dependent, and felt overworked. I lost my will to improve.

In time, I came to the realization that I was fighting this battle for more than myself. I wasn’t going to let Lauren, my parents or friends down.

So I stopped feeling sorry for myself and made significant improvements in my faith, exercised, and paid attention to nutrition and mental health. This aided in my ability to grow stronger and gain healthy weight.

A few years later through this healing process, I discovered my purpose in helping others through similar adversity I had overcome. Today I am now a keynote motivational speaker and mentor for other cancer patients and survivors to help them overcome the mental, emotional, and physical trauma cancer can bring while guiding them towards their new chapter in life with a new perspective and purpose.

Throughout this process as a mentor, I created a cancer Facebook group to build a unique family and community to help individuals regain hope and purpose in their journey with cancer and use each other as support and more importantly guidance in taking action towards their own healing process.

The group began with a few dozen people the first week or two but as we gained attention and word of mouth this family has now grown to over 1500 patients, survivors, and caregivers. I credit this moment to God, my amazing support in Lauren, friends, family, and lastly to every one of these incredibly strong members in this community.

Let my story serve as a testament of faith and perseverance. I look back now and understand that cancer happened for me, not to me.